Last few weeks of the competition before I make the big announcement...!
Posted by Copley Hill at 12:00 3 comments 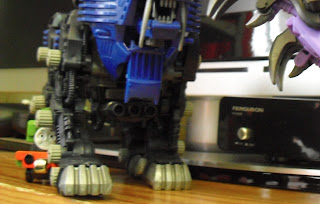 This one has been on the backburner for a VERY long time. However, it's now nearly ready and will be uploaded this week.

The basic gist of the review is to give an overview of the special, and to give out some freebies. I've got three copies of the BMM DVD, together with a superb pack of three Take'N'Play toys to give away.

The DVD is PAL only unfortunately, however should anyone from the USA or the rest of the world win, I will make sure they get an appropriate region copy of the DVD.

You might notice Luke hiding in the above picture. Finding Luke is actually part of the giveaway contest! You can enter as many times as you like, as in all of my previous Thomas & Friends giveaways.

Until next time!
Posted by Copley Hill at 05:09 5 comments

"First look at the Bachmann Duck"

Since breaking the news on Bachmann's Duck a year ago, I've endured a few hits in my time. I feel I've been somewhat vindicated by Bachmann's latest model.

There's no doubt in my mind that Bachmann have nailed Duck. The proportions are spot on for the TV series model. The only thing is missing is the white painted running plate. With that done, the model hits all the right spots. And if you look carefully...there's a hint of a stovepipe too!

Do bear in mind folks that this is likely to be a late pre-production model. This will have been made to test the moulds and the livery prior to release. As a result, minor aesthetic changes are not unlikely, but any major retooling at this stage is not going to happen.

Not that it needs to, to be frank!

Support Bachmann's superb range by buying Duck when he comes out. Know that I'll have a special Duck VS Duck review lined up at some point in the future, too!

I intend to completely overhaul the Hero of the Scales blog, amongst other things, whilst I work on the BMM giveaway video.

One of the things which will change greatly is the emphasis on Thomas - I want this to become a more model railway orientated blog in future.

The re-design is going to take some time, particularly as we'll have an all new set on which to test models in future.

Yes fellas, I am doing a Blue Mountain Mystery Giveaway in October. Copies of the DVD and some Take N Play models as a pack for each of three winners.

It's my way of saying thank you for your patience as we wait for new reviews to come out. I'm still sitting on Oliver and Murdoch, which are in the editing stage but not finished yet. Simply haven't had the time, sorry.

"You cannot be serious!"

One of the reasons I have been reluctant to post more Thomas review videos for a good while has been done to some of the YouTube comments I get on a daily basis. I don't expect everyone to agree with me, and it would be a pretty boring life if everybody did (!) but some of the things which get thrown at me are, to say the least, incredible.

This for example, from "Thegodsrighthandman" on YouTube this week, regarding the Diesel VS Diesel review:

Sorry but how did Bachmann win?

Hornby had Much better detailing through and and through, engine covers, rivet lines etc . . . The cab was hollow allowing for drivers to be sited, the side rods were finer quality and the face was correct. It had equal pulling power and better speed.

Did you fail it just for being discontinued? What about ebay prices?

How Much Did Bachmann Pay You????


So to clarify (once again) the two brands, Hornby and Bachmann, are marked on different criteria. For Hornby it's adherence to the prototype, for Bachman it's to the TV series model. Bachmann's Diesel model nailed the criteria I was marking it on.﻿ Hornby's didn't. The side rods are incorrect compared to the prototype, it's not scale length, there are many incorrect details including engine covers, exhausts, and so on and so forth. If Bachmann had paid me I wouldn't have taken the mickey out of the Bachmann Diesel's face!

So to remove any doubt, I only get paid by YouTube for my videos. There is absolutely no commercial arrangement with either Hornby or Bachmann.

However, that wasn't the end of the story from Thegodsrighthandman this week...on the Edward video, this is what was said:


I'm sorry. I've watched several of these vid's an' I'm not gonna watch any more.
You are obviously﻿ Payed by Bachmann.
The Bachmann Models are based on the Dreadful US-made Thomas series. Rev. W Audrey is turning in his Grave at what they have done to it. The faces of the Loco's have little individuality so they have become Bland. The story teller is Bland. The stories are Bland. The characters have been changed to be so PC they are Bland as well.
D/L the Ringo Starr series. So Much Better!!!

To clarify a few points: Awdry is spelt thus and not Audrey.  The two models are (like in the Diesel VS Diesel review; like every review in fact) marked on different criteria.

Hornby's choice﻿ of the D49 as a basis was an odd one and the wrong one in my opinion.

The current storytelling of the TV series isn't down to me I'm afraid, so not quite sure why I'm getting the blame for it. Incidentally, the TV series is not US made (up until this year it was made by a Canadian company called Nitrogen Studios, prior to that it was all filmed in the UK) and the Bachmann models up to Bill & Ben have been drawn from the UK made series 1-5.

So you imagine my frustration with having to deal with this sort of nonsense. I'm not paid by Bachmann. If I were, I'd give much better reviews. I wouldn't have completely undermined the Bachmann Percy's design (which is still very poor compared to the high standards set by Edward, Bill & Ben and Donald & Douglas) either.

I am however (against my better judgement) working on several new videos, including Murdoch, Oliver and Mavis, so Hornby VS Bachmann will return around September time.

I have promised new reviews - and they will be coming later this year. Murdoch, Oliver and Mavis will be incoming during September.

There's been a few changes to the video descriptions and this blog too. My preferred supplier for the Bachmann range in the UK used to be trainsontime, but they sadly closed this year, for completely fair and understandable reasons.

Happily, the chap behind trainsontime has set up a new mail order business, and as a token of my appreciation for the hard work he's put into setting up the new "The Dieselworks", all of my review videos now have in the description:

Simon's preferred supplier for the Bachmann Thomas & Friends Range is:


It is, after all, true! I wholeheartedly reccomend thedieselworks.co.uk

Until next time!
Posted by Copley Hill at 01:17 9 comments

"The Virtue of Patience"

There is a point where I begin to wonder: why bother?

I have had a spate of comments on this blog with some pretty uninspiring stuff being posted. The sort of things which have a wholly negative effect.

Well, here is that update. The Murdoch review is in the filming stage, and due in no small part to my full time job, and The British Railway Stories, which I am working on very hard, is being delayed until I can be satisfied it is to my own exacting standards.

You'll forgive me I hope for not wanting to emulate many of the extremely poor reviews by the rest of the fandom; which do not go into the pinpoint, precise, and carefully considered commentary that the Hornby VS Bachmann videos do. There are exceptions, of course, which are a lot better.

So why post now? Well, here's a selection of the comments:

Understandably, I have been very busy, and the review series is a "nice to have and fun to do" additional on my Youtube channel, which is primarily there to promote my made for Youtube The British Railway Stories, and the companion books.


The relief at reading the next comment was palpable!


Simon's probably got loads going on in the 'outside' world.. it'll be here whenever he can get it here.


Honestly I didn't know about this until just now, and I'm very excited. Hornby's Murdoch is a good-looking engine, I'd love to see a full review on it, especially from Simon!
Henry's review should be excellent as well. :)

I am extremely grateful for comments such as the above. A proper grip on reality, and a positive outlook. A personal thank you to Lightninging93 is in order.


Then we get this:


Simon.....I love and respect you dude. Your videos are awesome. I understand you have tons work and a life....but seriously.......It's been over a month and nothing.....smh


I agree with you man. Understanding can only go so far...You are supposed to be running a website. At least give us some updates.


All "Anonymous" of course, because they are far too many cowards in this fandom who don't want to be held to account for their own failings in life.

Yes it's still being run: no, I don't have any updates as yet: and I do not owe anyone a living on Youtube, Blogger or elsewhere.

You might not see a new Hornby VS Bachmann video for another six to eight months, know this now. Real life is currently rather tough with a job which sees me driving all over London and the South East, day to day, racking up in and around 450 miles a week.

So in short - have some patience, please.

"Reviews on the way"

Yes, some new reviews are on the way this month! More 60 second reviews, and a full and detailed look at Murdoch, in which there will be the chance to win a fabulous prize...!

Until next time!
Posted by Copley Hill at 16:05 9 comments

In response to feedback over the last year, I will be revisiting many of the models I reviewed last year, with succinct and to the point 60 second reviews. I intend to do one or two a week, focusing mainly on the Bachmann Thomas & Friends range, in anticipation of the Duck The Great Western Engine release later this year.

All feedback on this first video in the 60 Second Review series will be much appreciated.

Until next time!
Posted by Copley Hill at 07:23 6 comments

Day of the Diesels!

Celebrating Day of the Diesels in the UK!

Who will be next?

Pageviews from the past week